It's Gonna' Be a Bright, Bright, Sunshiney Day (FINALLY!)

I'm very thankful that we no longer have the drought conditions that we had for the past few years, but the constant rain is really getting old. I've never seen so much water in the Arkansas River (which is usually just the Arkansas River Bed in South Tulsa), or in our backyard/swamp. Despite the 60% chance of rain today, though, it was sunny (actually partly cloudy) most of the day. Mason was so excited to finally get to swim in the pool that he's only been able to look at through the rain for 5 days. He LOVED it - actually doggie-paddled some for the first time. He even came in at the pre-appointed time without throwing a fit. That may not seem significant, but it's truly a miracle. I'm SO glad he's happy with his non-canine early birthday present.
Posted by Mrs. Trent at 12:48 PM No comments:

Carter is coming out of his baby shell quickly. To quote my clever friend Kari Jo, "Oh no, he's human." (original was 'she' in reference to her toddler daughter) That sums it up perfectly! Babies seem to reach this moment when they quit being the chubby, smiley little blob and start being the funny, curious, trouble on wheels. Carter has learned how to climb on furniture, jump on it, and consequently, fall off of it. He is immitating everything his big brother does - for better or for worse. He tries new words every day. It was super cute a couple of days ago when he switched from 'mama' to 'mommy,' but the novelty wore off after he added the demanding edge to it and said it a million times a day. On the positive side, he loves to give hugs and big, slobbery kisses - such a little love bug.

Rain again today. I feel like I live in Seattle.
Posted by Mrs. Trent at 4:45 AM No comments: 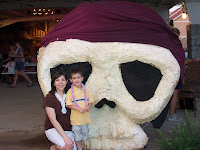 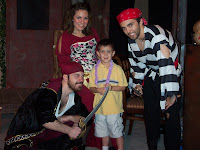 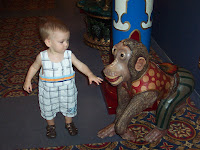 I love going on vacation, but it's always so nice to come home. We had so much fun, and I found a new career. I want to be a magician's assistant for the Kirby Van Birch show. Of course, I have to lose 30 pounds and learn how to dance first - I'll work on that this summer.

When we got home, we immediately started on another adventure. Jas decided to see if Mason would go for a pool for his birthday instead of a dog. He's wanted a dog for months and hasn't budged with any other substitutes we've offered, so I was shocked when he went for it. They went to Academy right away and bought an above ground 4' deep pool. It does NOT take 30 minutes to install like the box claims, but it's still much less trouble than a dog would be over the next however many years. Dad had to go back to work, so it's up to Mom to finish the job today - better get busy!
Posted by Mrs. Trent at 7:28 AM No comments:

We're in Branson on our first ever Trent family vacation, and so far it's a huge success! The resort where we're staying has pools galore to satisfy Mason's appetite for swimming. They also have playland "jungle gyms" for the kids, which has been a bigger hit with Carter than the pools. He's not sure about playing in water deeper than his bathtub. He did finally loosen up and splash a little today, but I'm not calling him a water baby yet. He has two new words he's used the whole time we've been here. He uses 'owww' when he doesn't like something, like being in the pool. It sounds like something is hurting him, but it's really just a mild complaint. His other word is 'myyy' when he wants something - might be 'mine' - I'm not sure. Mason and I went to the luau/pirate show here at the resort tonight, and tomorrow we're all going to see Kirby Ven Burch - the magician with tigers, helicopters, and even a vanishing unicorn. For the $70 we paid for the tickets, it'd better be a real unicorn!
Posted by Mrs. Trent at 8:09 PM No comments:

Mason's new obsession is looking through his telescope into "space." It was so cloudy last night that we couldn't really see anything, but Mason swears he saw Mars. He says he saw something red. We did look around the neighborhood during the day, though. It was fun looking in people's windows until I realized that that's probably illegal - I'd feel really bad if I turned Mason into a peeping Tom :-0. We'll have to stick to looking at imaginary red planets from now on - maybe we'll find a real one!

Carter's become a banana addict. He can't get enough of them, and he scarfs them down in seconds. He must have a potassium deficiency.

We applied to adopt a dog today from a rescue shelter - a chihuahua/pomeranian mix. Mason has been begging for a dog for his birthday. We've tried everything to change his mind - offering a trampoline, swingset, etc. instead of a dog. He's set. SO...we're trying to get the smallest, least amount of trouble dog we can possibly find. NO puppies - we tried that once and sold it after 2 weeks.

It's not every day that you get to meet a whole new side of the family - that's what we did this weekend. We made a little trip south so Jas could see relatives he hadn't seen in 25 years or so. We even discovered a cousin for Mason and Carter - adorable little Kaison (in picture with Carter). It was Grandma Francile's 85th birthday, and we're thrilled that we got to spend it with her and her family. Mason was escpecially thrilled because he got presents - vintage toy cars from Francile and a telescope from Uncle Dennis. He's been dying for a telescope - he bugged us all the way home to promise we would let him set it up as soon as we got home so he could look at the moon. It's not hard to guess what we'll be doing tonight the second it gets dark :-).
Posted by Mrs. Trent at 2:55 PM No comments:

Summer is here, and that means I never know what day it is. It totally feels like Monday today - maybe because all last week was on big blur of sickness. We all had a turn with the stomach flu - mine was the worst by far. I haven't been really sick since I had kids. It turns out that kids still expect to be dressed, fed, and taken care of when Mom is deathly ill. Hopefully they'll be old enough to take care of themselves the next time I'm that miserable :-).

We're working on getting into summer routine that includes fun things like free swimming, free movies, library summer program and the park (both free), and other free things. Gas is so high, we'll have to take out a loan to drive to all these places - especially the zoo (sort of free - after paid membership). I'm excited!! I just wish someone would come clean my house for free while we're out on the town. I'm not holding my breath.
Posted by Mrs. Trent at 6:22 AM No comments: