Christmas at Gigi and Grandad's

We drove into town on Friday and went straight to the hospital to see our new little cousin/nephew, Baby Isaac. He's the cutest little thing, and we can't wait to see him again on Wednesday.
Once we got to Gigi and Grandad's house, Mason and Carter ran in and found their presents under the tree. Carter's eyes got huge when he saw what was there. "WOW...COOL...a TRAIN!" Then he saw his present behind Mason's train and he gasped, "AND a FIRE TRUCK!" We didn't even have time to unload the car before they were playing with their toys. Mason was beyond thrilled with his electric train, Webkinz puppy, and Titanic toys. Carter crawled in and out of his fire truck toy box, and he pushed his fire truck scooter all over the house. I was pretty happy, too, with my new Wii Fit and food processor. Mason is trying to convince me that the Wii Fit is for the whole family...I don't know about that...
I've also had a fabulous time catching up with old friends. Becky and I spent an afternoon going around town taking pictures of the things that make Borger special/unique/nostalgic for those of us privileged enough have lived there. Then our good friend Luisa stopped by for a chat...just like old times...very old times :) I couldn't ask for a more perfect trip home!
Posted by Mrs. Trent at 4:41 PM 1 comment:

Footballs and Fire Trucks (and a puppy)

Three Christmas celebrations down - one to go. On Christmas Eve, we started at our friend Wanda's house to admire at her vast collection of Hallmark ornaments and exchange gifts. We brought a tiny one and left with 2 really big ones. Carter got an enormous fire truck, and Mason got Lucky the Wonder Puppy that obeys commands. I think they actually would have been happy with just those presents for Christmas, but there were many more to come. Later that evening, I let the boys open the present that they made for each other. I had this brilliant idea for a new Christmas Eve tradition...except Carter didn't understand the concept of giving away something he worked so hard on. He wasn't happy when it came time to exchange presents and give away "his" hand-painted red train. He got over it, though, when he saw the coloring book and crayons that Mason had made for him. He still thinks the red train is his, but he doesn't try to steal it anymore.
Christmas morning came quietly. Mason is a late sleeper...even on Christmas. Once Carter and I woke him up, though, he was by the tree in seconds. He got, among other things, a box of football shirts. He didn't look thrilled when he saw the shirts, but he didn't say anything. Later that morning, he asked me why he and Carter got shirts for Christmas. He did love his Wii football game, though, and Carter spent most of the day in his fire truck bed tent. They were even more excited when Mimi, Grandpa, and Betsy came with stacks of presents. Mimi slipped in a box of clothes, too. It must be a mom thing.
Now we're all packed and ready to leave for Christmas celebration #4 in good ol' Borger, Texas. We're hoping for a new baby cousin when we get there. He was due Christmas Eve, so our chances of seeing him this week are good. This could be the best Christmas ever!
Posted by Mrs. Trent at 8:06 PM No comments:

Mason was kind enough to let Carter crash his class Christmas party today, and we all had a great time. The kids had centers where they could make bead necklaces, cardboard candy canes, and ice cream cone Christmas trees. Somehow I missed the memo about bringing a book to exchange...it looks like I'm going to be one of those parents. Maybe by the time Mason's in 5th or 6th grade I'll have my act together.
Posted by Mrs. Trent at 2:50 PM 1 comment: 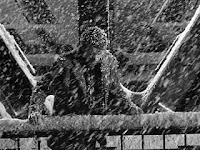 I have to admit that I had a few George Bailey moments this weekend. I haven't been close to jumping in a river, but I have thrown a few "pity party" temper fits because things aren't going my way. And I might have snapped at my kids a few more times than they deserved. So God decided to put It's a Wonderful Life on my TV today. I've never watched it as an adult, and I don't even think I've watched it from beginning to end. Here are some things I noticed:


Okay, so I might have missed the intended point of the movie. I did take the hint, though, and decided to find ways to solve the problems that have really been eating at me. The main issue is the unorganized state of my house, which leads to maddening searches for keys, shoes, coats, etc. several times a day. So I started the quest for organization today by straightening my desk and hanging a key rack. That's not going to help me keep Carter from losing his shoes, but it's a start. Maybe by the new year I'll have the entire house and both cars organized from top to bottom - like that Kate chic with 8 kids. If she can do it with 8, surely I can do it with 2...right?

The Glenpool Christmas Parade was this weekend. Mason was on the FBC Awana float (that won 2nd place), but somehow I didn't get a picture of it. Carter and I (and Christina, Tabi, Ben, and Cooper) watched from the side, trying not to blow away in the gale force winds. Notice the horses and motorcycles. No small town Oklahoma parade is complete without horses and motorcycles. The other essential factor is the local news anchors and weather people riding in convertibles. Didn't get pics of them, either.

Mason is quite the inventor. This is his telescope, made entirely of tape and construction paper. He eventually decided it didn't work and started using it to hit Carter. But it was clever while it lasted.

I'm not sure what Carter was thinking with this look. The fireman hat/pajama shirt/backwards underwear/high heels getup looks like something straight out of a parade in San Francisco. The fireman hat, by the way, is a permanent part of his wardrobe these days. He insists on wearing it to school, church, the store, etc. People around here don't recognize him without his hat.
Posted by Mrs. Trent at 5:03 AM No comments: 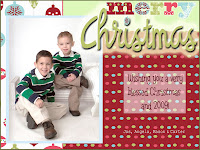 Hope this Christmas greeting finds you happy, healthy, and surviving the hustle and bustle of the holiday season. We’re enjoying a wild and crazy December with two little boys who are begging for every toy they see and waiting very impatiently for Christmas to come. With 2008 coming to an end, we thought we’d send our own version of the year in review.

2008 started with plans and preparations for Mason’s mitral valve repair surgery. It was scary and stressful for sure, but we had a ton of support from our loved ones. Thanks to your prayers, cards, and generous giving, we’ve never felt so loved or so blessed. By the time March 11, the date of the surgery, rolled around we had that “peace that transcends all understanding” that Philippians 4 talks about. The surgery was a huge success, and Mason is a much healthier kid now. Even his pulmonary problems, which had been diagnosed as asthma, have almost completely gone away.

Later in the spring, we decided to put our house up for sale, which is an adventure in itself. We spent the weekends painting and cleaning, trying to make it look like HGTV says a house should look when it’s on the market. Of course, they have a staff to make that possible – and no kids around to undo what’s been done. Thank goodness we sold the house fairly quickly. And, just for the record, the house was a total disaster the day we showed it to the people who ended up buying it. We had moved the furniture to paint, and the buyers showed up on our doorstep asking to look at the house. So much for HGTV and their “staging” theory.

In September, we closed on the house and moved three miles away. The moving process was just as busy and hectic as everyone says it is, especially with a two-year-old around. Carter was really good at unpacking boxes – while they were still at the old house waiting to be moved. Hopefully we won’t have a toddler the next time we move. It’s not good for a person’s sanity.

In the midst of all the selling and moving chaos, Mason started first grade, Carter started his class at the Jenks FBC Preschool three days a week, and I started working across the hall from him in the three-year-old class. I also started a freelance writing career from home, which keeps me busy when I’m not at the preschool. Jas finished German I and German II in the spring, officially fulfilling all of his degree requirements for his BA from OU. He’s also working on a “Jewish Roots” Christian ministry and should have a blog up and running soon.

In hind sight, 2008 has been a turning point for us in many ways. We look forward to discovering what God holds for our lives in 2009 and beyond. There’s never a dull moment around our house! We wish you a very Merry Christmas and hope you’ll drop us a line to let us know how you’re doing!

Every December I flounder through the holidays, trying to get everything done, observe as many fun traditions as possible, and appreciate all the little moments with my kids. And then every January, I vow to do a better job with the process next year. Just for the record, this December is no different - no more spectacular or more organized or more enjoyable - than any other year. There have been a few highlights so far, though.