One of the hardest things about parenting is making decisions about when/where/how to answer the tough questions. One of the toughest questions this time of year is about Santa Clause. Do we ruin the magic of Christmas if we tell our kids that Santa isn't real?

My husband and I didn't really have much of a choice in the matter when our oldest child was little. He was an ultra-inquisitive, spiritually sensitive 5-year-old who refused to drop the topic until he thoroughly understood how Santa was the same as God (invisible, loving, giving) and yet totally different from God (like mommy said he was). He wore me down one night at bath time until I finally cracked and told him the truth... that Santa is a fun story, but not really real like God is. I also explained that he needed to keep that information to himself, but he blurted out the truth to the first vanload of kids he saw the next day. That was the first of many apologies I've had to make to the parent of a "believing" family.

It's only recently that I've decided I don't owe those families an apology for teaching my children the truth. Here are three reasons why I can't find a way to fit a "real Santa" into a Biblical Christmas.

3. Unto the Least of These
Jesus commands us in Matthew chapter 25 to be ever mindful of those who are in need. If you've ever seen The Polar Express, you can picture the boy from the other side of the tracks, Billy, hanging his head and saying "Christmas just doesn't work out for me." Our schools are filled with kids just like Billy who hear their middle class peers talking about the gifts that Santa brought them. Why does Santa only bring me a dollar store toy when he gives the girl next to me an iPad, a PS4 and expensive outfits? That question has to go through their minds. I know it does because I used to teach in a school a rough neighborhood, and I heard those kinds of comments.

I'll never forget the three girls who lived with five other family members in a one room apartment. The school staff bought the family Christmas dinner and several presents, including EZ Bake Ovens for all the girls. The oldest one told me later that her mom had sold all the toys to buy beer. I wonder if those girls knew there was no Santa, or if they just assumed Christmas didn't work out for them.

Where is Jesus in all of this? Why aren't kids from Christian homes spreading news about the only gift that is free and eternal - the gift of Christ Jesus, who loved ALL of us enough to die for us? I'm a mom and a teacher, so I know this question is a bit unrealistic. Most kids aren't going to be missionaries to their first grade classmates. But I do think they're more likely to share the good news of God's son as they get older if the focus at home is on the TRUE giver of gifts.

2. Gifts Come From the Heart
About the same time my son was trying to figure out God and Santa Clause, my dad was planning to buy a Polar Express electric train to give as a "Santa" gift. I, on the other hand, wanted my son to know that his granddad had picked out that gift especially for him because he loved him and knew how obsessed he was with trains at that time. Gifts bond us to one another. Human beings crave connections, and God gave us families to fill that need. It seems to me that we unintentionally devalue those family bonds just a little when we give Santa the credit for gifts of love.

1. I Believe... In What?
The last scene of the Polar Express movie is supposed to be inspiring, but it really bothers me. We live in a culture that uses the word 'believe' very loosely. The secular world teaches that it doesn't' matter what you believe, as long as you believe in something. As Christian young people get into high school and college, they are going to be bombarded by the world's definition of belief, and I think it's important that we give them a strong foundation in the truth from an early age. They need to know that the only God worthy of our belief is the God of the Bible. The only man worthy of our praise is Jesus. And the only spirit worthy of our trust is the Holy Spirit.

I'll still smile when my kids write letters to Santa, and we'll watch his sleigh show up on the weather radar Christmas Eve. We might even make cookies for Santa and leave carrots for the reindeer. But I make sure the kids know it's all in good fun, and the real reason for celebration is God's gift of unconditional, incomparable, eternal love.
Posted by Mrs. Trent at 11:06 PM No comments: 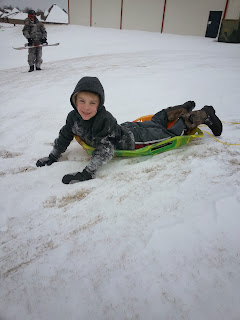 After much debate, we decided to buy a real Christmas tree this year. 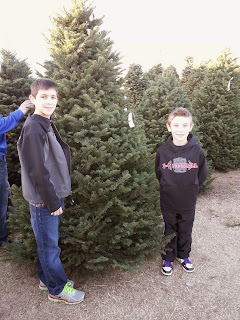 This is the tree we found at a tree farm, but it was twice as much as we wanted to spend. So we found a close second - slightly less-perfect tree - at Lowe's. We brought it home, spent hours figuring out how to steady it, feed it, and string lights on it (after stringing them backwards the first time and unwinding all six strands). The boys hung ornaments (and I rearranged every single one when they weren't looking). 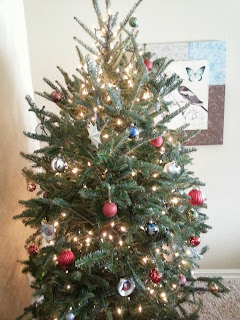 Ta Da!
Except for the branch that needs to be trimmed on the bottom, I think it looks pretty good. The boys are happy with it, anyway, and that's all the matters, right? 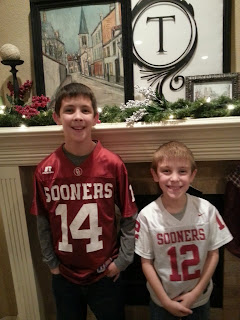 I managed to live almost 40 years without having to deal with lice...even after teaching 17 years and having two kids in public school. Now that these disgusting little creatures have made their way from Carter's classroom our heads (don't get me started on the insane privacy policy that prevents schools from warning parents about lice in their children's classrooms) I've learned a thing or two about lice extermination.
Posted by Mrs. Trent at 5:40 PM No comments: