I've been interviewing for teaching jobs for next year - not an easy process, to say the least. We've had lots of "pros and cons" discussions and prayers about which offer to accept. At one  point, there was a chance that Mason and Carter would have to transfer to a new district - the district where I would be teaching. I asked for their opinions, and they were generally in favor of going to a new school. But then they really thought about it, and Carter decided he wanted to stay at Glenpool because they have high school "friends" helping in the classrooms. I reminded Mason that he wouldn't get to be in class with any of the new friends he's made this year. He said he didn't care....until I mentioned a little girl whose name has come up a lot lately. Once I pointed out that he wouldn't see her anymore, he said, "Never mind. I'll stay at Glenpool." Looks like I'll be teaching in Glenpool.
Posted by Mrs. Trent at 6:44 AM No comments:

I stole an idea from another parent and came up with these cute baskets for teacher gifts. I call them "End-of-the-Year Survival Kits." Only $10 each - thanks to Dollar Tree! 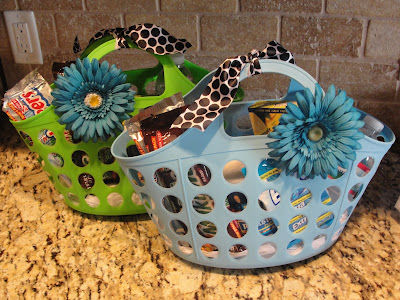