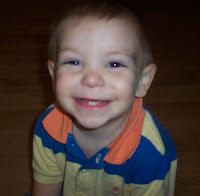 I love the one-and-a-half age. Even though the little boogers are into everything and can throw one heck of a hissy fit, they're hilarious when they discover their ability to make other people laugh. Carter says, "Wook, Mama, wook!" When I 'wook' at him and he has my attention, he makes a silly little face or does a goofy dance. Then he looks back at me to make sure I'm laughing. His favorite phrase is, "I tiss you," which is followed by a wet, slobbery baby kiss. He's a love!

Mason can be funny, too, but we're used to his antics now that he's 5. He's not going to be a professional comedian, though - he's more likely to be a rocket scientist. He LOVES space. Once again, he does not get that from his mother. We've had the NASA channel for about a week, and he would much rather watch that - even the incredibly boring press conferences - than the goofy kids shows that are on (except Sponge Bob, and he only wants to watch that because he's not allowed to). He wants to get out his telescope every night - thankfully it's too cloudy some nights, because Mom is bored to tears with the whole astronomy scene.