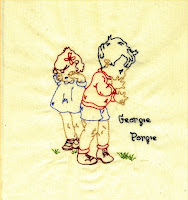 Mason and his friend Shawn have been playing cops during recess, but Mason told me yesterday that they've changed their game. Now they're chasing the girls.