The Wonderful World of Sports

I vaguely remember saying, when the boys were babies, that I would NEVER let my schedule be dominated by kids' sports. Add that to the list of nevers that have been unceremoniously thrown out the window (right along with never letting them wear character clothing and never letting them eat junk food). We have, at least for now, kept their sports schedules to one practice and one game a week...multiplied times two kids, of course. I've discovered that, at least for now, the practices and games are actually kind of fun. There are usually other moms to chat with, and the boys love getting out on the field.

Mason has a knack for throwing the football. He's enjoying being one of the quarterbacks this year. He says he's "the boss," which is right up his alley. Carter has only had one soccer practice, but he super serious about that soccer ball when he's on the field. Don't tell him it's little league soccer - he thinks he's working for the World Cup. 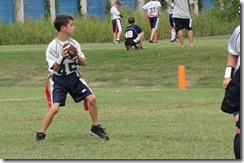 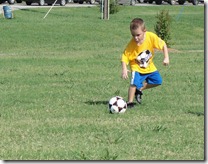